As the title of this post suggests, Amazonite really is quite an amazing gemstone! Not only does it look incredibly beautiful when worn as jewelry, it has an interesting history and some pretty awesome healing and metaphysical properties too.

Amazonite is a variety of Microcline, which belongs to the Feldspar group of minerals and forms in masses or tabular crystals. Feldspar is one of the most abundant types of mineral in the world, but only a few varieties can be classed as gemstone quality.

In terms of appearance, this gemstone is found in colors ranging from soft milky green to blue-green or turquoise. Some varieties have a mottled or spider-webbed pattern. Amazonite’s unique color is created from small quantities of lead and water.

This is a relatively inexpensive gemstone, making it a popular choice for use in jewelry-making. It’s often cut into cabochons or beads – we have some fine examples on our website! This is a gemstone that’s very soft and because of this, it can fracture or break easily, so it should be handled with care.

This beautiful gem is sometimes called “Amazon Stone”. It’s named after the Amazon River in Brazil where it was first believed to have been discovered thousands of years ago. Whether this stone was actually found there is uncertain now as mineralogists have since claimed that there are no Amazonite deposits in the Amazon itself. Gemstones found there are assumed to be nephrite Jade instead.

Amazonite is still found in other parts of Brazil however, as well as the USA, Australia, Russia and Madagascar. It is said to have been used as far back as the 10th century B.C. by the semi-mythical Amazons – a tribe of powerful female warriors, who wore it as part of their shields. It was also worn as jewelry thousands of years ago in South and Central America.

Healing and metaphysical properties of Amazonite

Amazonite promotes general good physical health. It’s believed to help the human body to heal after trauma or illness. In particular, it has associations with treating the nervous system, throat and thyroid gland.

It is also known as the Stone of Courage because it helps the wearer to eliminate personal fears, combat loneliness and get past conflict or confrontation more easily. This is a calming gemstone which helps to provide balance and harmony, in relationships and in general everyday life.

Amazonite could be a useful gemstone to wear while working because it also promotes positive energy and it has links with prosperity too – it’s said that it can help bring about new business opportunities!

In addition, this gemstone is thought to be a good luck stone and may help the wearer to win a game of chance, a competition, or in fact any kind of financial endeavor!

When you factor in the beautiful appearance of Amazonite, its interesting characteristics and healing properties along with the fact that you can buy it at a reasonable price, it’s no wonder that this is such a popular gemstone today.

We hope you enjoyed this article about Amazonite. For further reading like this, you might want to check out other product stories on our blog! 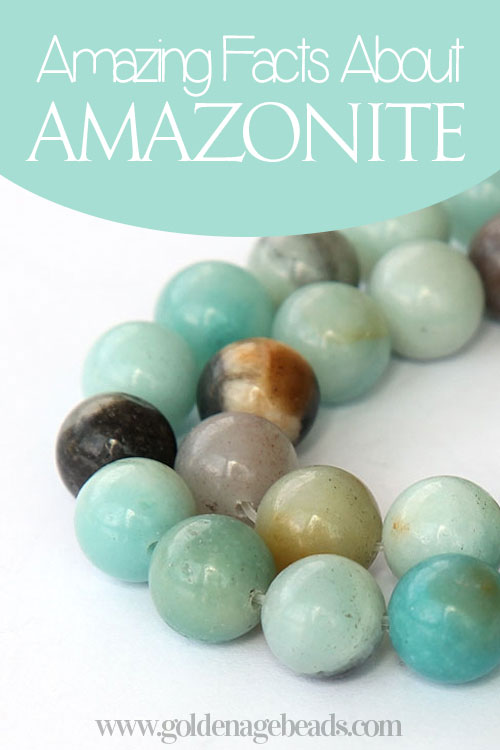 One thought on “Amazing Facts About Amazonite”