Howlite is perhaps best known for being an imitation gemstone, as it can be dyed different colors to look like semi-precious gemstones such as Turquoise and Coral. Even though Howlite is generally inexpensive, it still has plenty of qualities that make it a popular stone for use in jewelry-making.

Howlite is a borate mineral found in sedimentary rock. It was first discovered in Canada in 1868 by Henry How, a Canadian chemist, mineralogist and geologist. A group of miners brought it to his attention when they came across it while mining, finding it to be a nuisance because it was harder to mine than gypsum.

Henry How named the mineral “silico-boro-calcite”, but later it was given the name Howlite by James Dwight Dana, an American geologist and mineralogist.

At source, Howlite is usually found in irregular shaped nodules that look a bit like the head of a cauliflower. Howlite in crystal form (as shown in the above picture) is rare.

Howlite has a white marble-like appearance with threaded gray, black or brown veins running through it. Some forms of Howlite are just pure white however. Howlite is a porous stone that can absorb dye well, which is why it’s often used to imitate other gems. 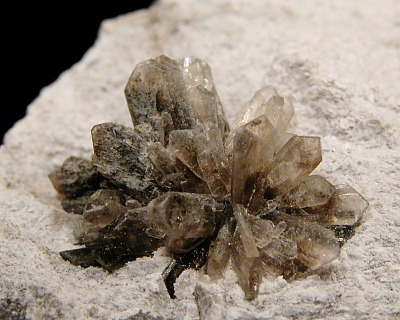 Some dishonest gem traders will try to pass Howlite gemstones off as more expensive semi-precious gems (like Turquoise, Coral and Lapis Lazuli) after it’s been dyed, but there are some ways to tell the difference.

Usually, these “fake” gems will look a little too perfect because genuine gemstones tend to have natural color variations. You can also tell sometimes in the description or labelling of a product whether or not it’s a substitute for the real thing.

In our opinion, Howlite gemstones should be appreciated for what they are, rather than what some people would prefer them to be – after all, they are very beautiful in their own right!

When it comes to spiritual and emotional powers, it’s believed that Howlite heightens awareness and patience. Howlite is a calming stone and it can help its wearer to reduce their own levels of stress and anger, as well as anger that is directed towards them.

Howlite absorbs negative energy and its calming qualities are thought to also help reduce insomnia as it relieves and unburdens an overactive mind.

In terms of physical healing powers, it’s said that Howlite can help to balance calcium levels and strengthen its wearer’s bones and teeth.

Howlite may not be seen as precious as other gemstones; however this is a stone that should be appreciated for its own many qualities. Whether Howlite is tumbled and polished into beads or fashioned into cabochons or other shapes, there are plenty of ways that this stone can influence creative jewelry design.

Want to learn more about gems and crystals? This comprehensive guide will come in handy:

With striking photos of over 200 crystals and detailed descriptions of each stone, The Crystal Bible is the only guide you’ll need to clearly identify crystals.

Tourmaline is a form of silicate and grows in a trigonal crystal system, producing prismatic shapes with terminations of multiple facets. These crystals are often vertically ridged (or striated). Quartz…

Pearls are one of nature’s most valuable gifts, recognized around the world as a symbol of wealth and perfection. It’s actually the oldest known gem – existing even before history…

Fabric jewelry has been around since ancient times and is still popular even now. In this post, we’re exploring some different types of fabric jewelry and what techniques you can…

Tiger’s eye is a variety of quartz that is well known for its silky luster and beautiful striations. It has inclusions of iron and quartz, which give the stone its…

There are so many different types, sizes and variations of seed beads! And of course there is no limit to the extent of beautiful jewelry you can create using them….

Handmade ceramic beads have the wonderful attribute of being incredibly unique, each one having been nurtured carefully into an art form through a lengthy process that starts with a block…