The United States of America is home to a plethora of different gemstones, with many being readily available across the continent. If you want to find your own crystals, there are some places you can visit and actually mine them yourself. Just remember to take a good shovel and excavations tools!

A Little Bit of History

America has been home to stunning gemstones for years and years, but the mining industry is still pretty small and has not developed all that much. Many of the USA’s gemstones are mined by amateurs, as large scale commercial mining is too costly and could cause environmental damage.

Jade takes us back in time, to Central America and the Mayan, Olmec and Toltec cultures, who would use jade to create masks and sacred objects. Native Americans also came to treasure tourmaline and turquoise, leading to a commercial gemstone industry which came about in the 1800s.

Early in the 20th Century, tourmaline was commercially mined in the USA and was in fact, the top producer of this gemstone in the world! The cost of mining tourmaline became too expensive and so this level of production is no longer occurring in the US.

Quick Fact: The USA is the world’s largest consumer of gemstones, but almost 99% of these crystals are in fact imported!

As we mentioned before, there are a ton of areas which are home to gorgeous gemstones in the US. Here are some of the most popular places to find crystals:

Known for being one of the leading states for gemstone production, Arizona is home to a number of different gems. Turquoise, petrified wood and peridot are 3 of the most renowned to be found in Arizona, but azurite, chrysocolla, malachite, agate, garnet, jade, jasper, onyx and opal have all been found in this state.

One of the most popular places for mining gemstones in Arkansas is the Crater of Diamonds. This site is accessible to the public, where they can pay a fee and then keep any diamonds they might find. Despite the diamond’s popularity, quartz is the most common gem to be found in Arkansas. Often called “rock crystal”, this clear quartz can range in size and clarity, giving it multiple uses i.e. beads, carvings and crystal balls. Other types of quartz are also found in this area.

Tourmaline and turquoise are the main gemstones to be found in California, namely San Diego and Riverside Counties. Other gemstones found here include agate, garnet, jade, jasper and quartz.

Aquamarine is the state gemstone of Colorado, which is predominantly found high up in Anetro Mountain. Rhodochrosite is another mineral which can be uncovered in this state – the Sweet Home mine near Alma has produced some of the best specimens. Other gemstones found in Colorado include amazonite, garnet, lapis lazuli, topaz, sapphire, turquoise… the list goes on!

Idaho actually has the nickname “The Gem State” as it is home to such a wide variety of gemstones. Some of the most well known crystals to be produces here are opal and star garnet. Jade, tourmaline, zircon and topaz are also found quite readily in Idaho too.

For over 100 years, Montana has been popular for a particular type of sapphire – Yogo Gulch sapphires. These stones come in a variety of shades, from blue to purple and even orange! Other crystals which are often searched for by gem fans are agate and jasper – particularly moss agate.

Although this state isn’t rife with gemstone mines, rubies, sapphires and emeralds can all be found here. North Carolina has pay-to-prospect mines when people are free to visit for a fee and keep whatever they find. There are also loads of other gems to be found in this area, including citrine, moonstone, smoky quartz and staurolite to name but a few.

As mentioned below, Oregon is well-known for its unique variety of sunstone, which is actually the state’s official gemstone. Other crystals found in Oregon are the thunderegg and opals. Thundereggs are meant to have been created by the Thunder Spirits who live in the craters where these geodes are found and they are often filled with chalcedony, opal or other crystals.

The pearl is one of Tennessee’s biggest gem outputs, with The American Pearl Company operating the only freshwater pearl farm in the USA, solely from this state. These pearls are cultivated to grow with varying colors and shapes.

Topaz is Utah’s state gemstone, however (mentioned below) red beryl, or bixbite, is becoming ever popular in this state. Other gemstones to be found in Utah are agate, jasper, opal, garnet and the rare Tiffany Stone. This purple crystal is unique to Utah and is often carved into beads and cabochons – it is made from a mix of fluorite and other minerals, including opal, dolomite, calcite and quartz.

The Most Popular Gemstones Mined in the USA

Although there are tons of crystals found in the US, there are 3 in particular which are unique to the country:

Of course, it is obvious from the name of this fiery orange gemstone that it is found in Oregon, but this is no ordinary sunstone. This crystal is very well suited to faceting and often has unique iridescence within the stone (caused by copper inclusions), which makes it the perfect choice for fine jewelry.

Not the most common of crystals, ammolite is a stunning, multicolored stone with iridescence similar to that of labradorite and opal. With hues of red, green and orange-brown, this gemstone stands out and really makes an impression. Found mainly in the Rocky Mountains in Southern Alberta, ammolite is made naturally from the fossilization of shells. The molecular makeup of ammolite means it is perfect to be used in jewelry, as it has a protective coating of quartz or synthetic spinel.

Red beryl is said to be one of the rarest gemstones in the world and it is found in Utah in the Wah Wah Mountains. They are often found in tiny pieces within rocks, often too small or imperfect to actually facet, which adds to their rarity. These crystals only occur under specific geological conditions, so the areas they are found in are few and far between.

Other Gemstones Frequently Found in the USA

We have mentioned a ton of different gemstones above, but here are the names of even more that have and can be found in the good ol’ US of A:

If you have always wanted to find your own crystals and gemstones, then there are some great places you can do just that across America – check out this list on Vogue.com!

November is another month that hosts two stunning birthstones that are quite opposite in character – the fiery Topaz and the gentle Citrine. Topaz is made from a very hard…

Tiger’s eye is a variety of quartz that is well known for its silky luster and beautiful striations. It has inclusions of iron and quartz, which give the stone its… 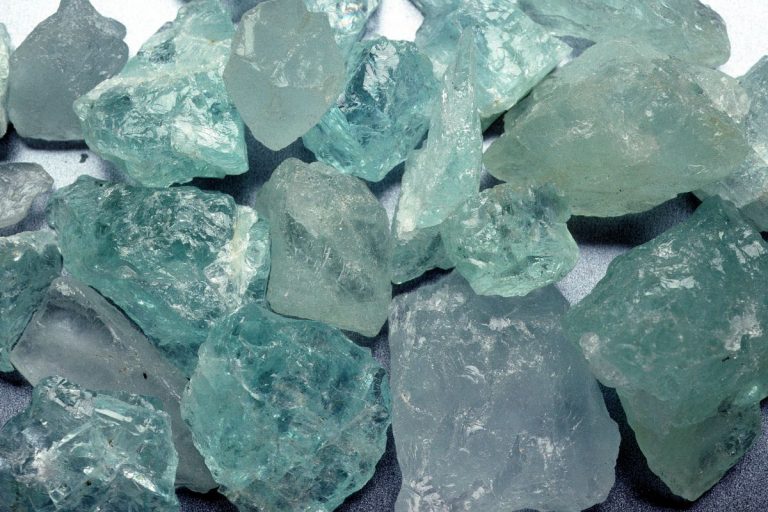 Aquamarine is the treasure of mermaids, and legends have it that for aquamarine to be truly powerful it must be immersed in sea water and bathed in sunlight. The gemstone…

The process of cutting and polishing gems is called lapidary. All gems are cut and polished by progressive abrasion using finer and finer grits of harder substances. Technicians used to…

If you’re lucky enough to have been born in April, your birthstone is the magnificent and highly valuable diamond! In this post, we explore some interesting facts about diamonds, including…

Wood beads come in a wide variety of shapes, colors, sizes and styles. When used in jewelry-making, wood beads provide a warm and organic feel to any piece. They are…