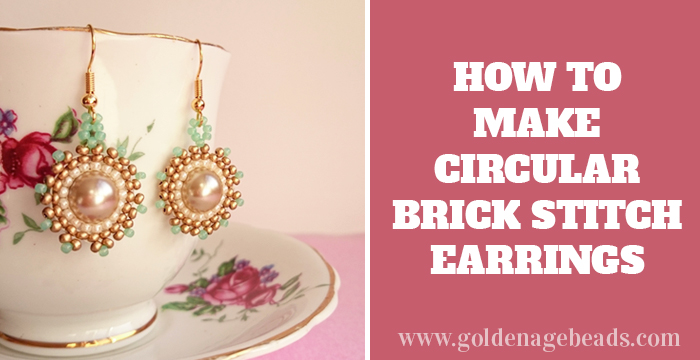 In this jewelry-making tutorial, we’re showing you how to make a gorgeous pair of earrings using a beadweaving technique called “circular brick stitch”. Once you’ve mastered this technique, you can use it to make some really pretty jewelry designs for pendants, earrings and more.

Although there are a lot of steps to follow for this tutorial, don’t worry, because this technique is easy once you’ve completed the first few steps!

For this project, you’ll need the following materials: 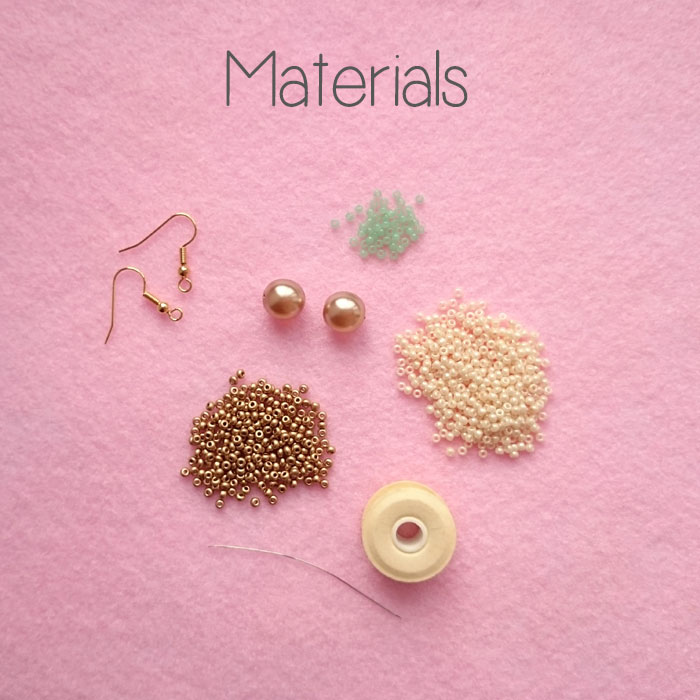 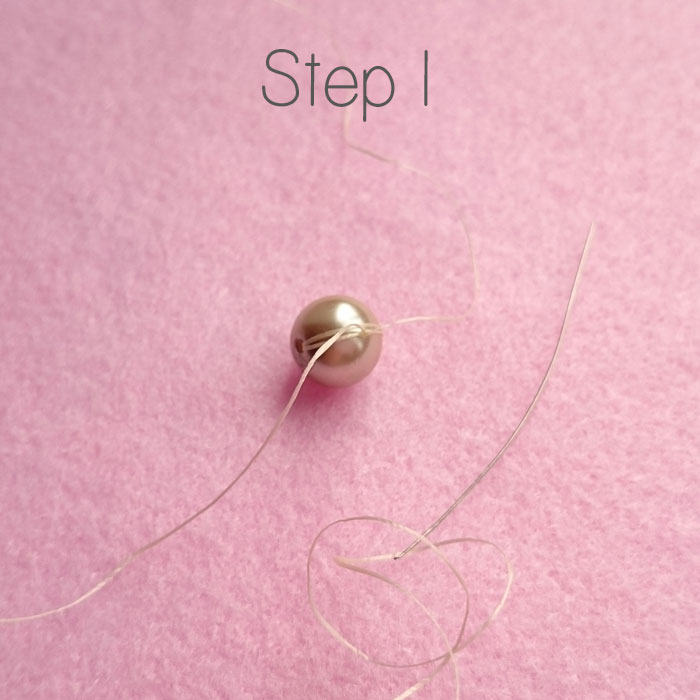 To begin, thread your needle with the Nymo beading thread and pick up one of your shell pearls. This will form the center part of each earring. Pass your needle through the hole in the center of the bead, leaving an 8 inch tail.

Keeping the tension of the thread tight, tie the two ends of the thread together in an overhand knot twice, so that the thread is wrapped around the outside of the bead as shown in the step 1 photo. 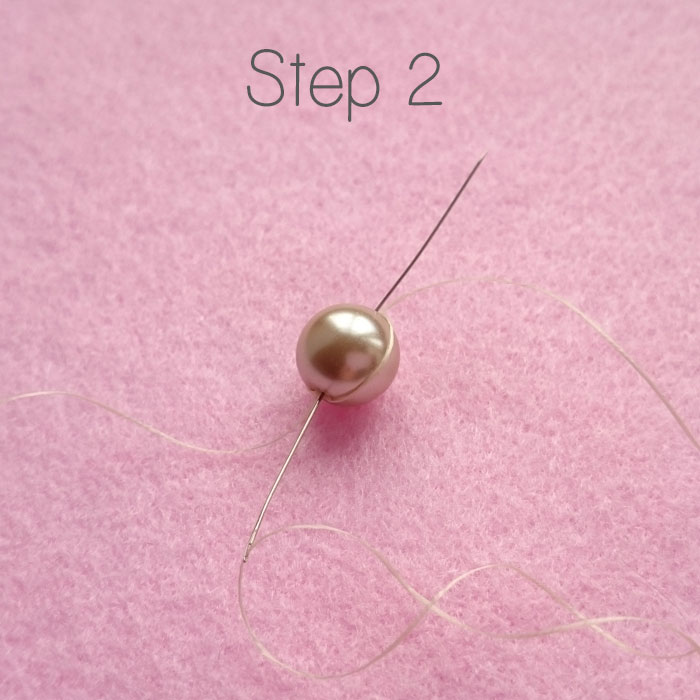 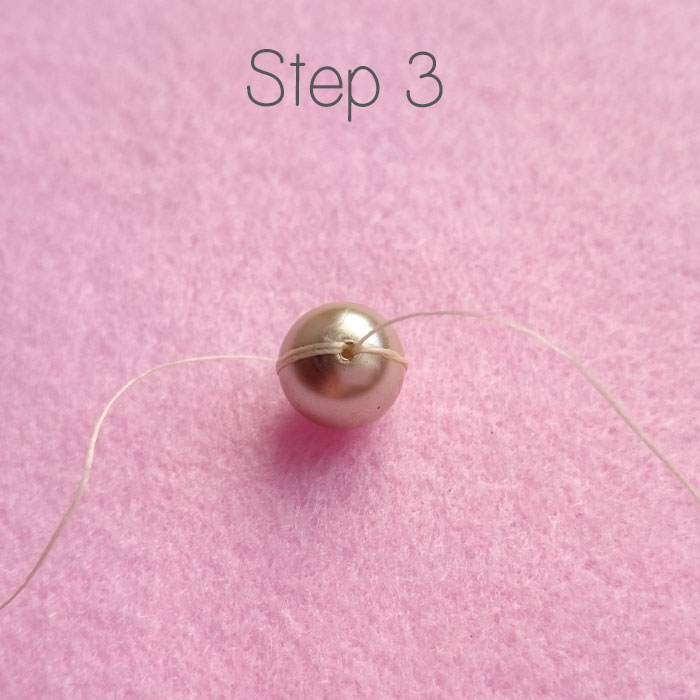 Pull your thread so that the knot you’ve just made tucks inside the hole of the bead to hide it. Then pass your needle through the center hole in the bead again and move the outside thread to the opposite side of the bead.

Repeat so that you have two strands on either side of the bead, as in step 3. Make sure you keep the tension tight so that your thread lies snug against the bead. 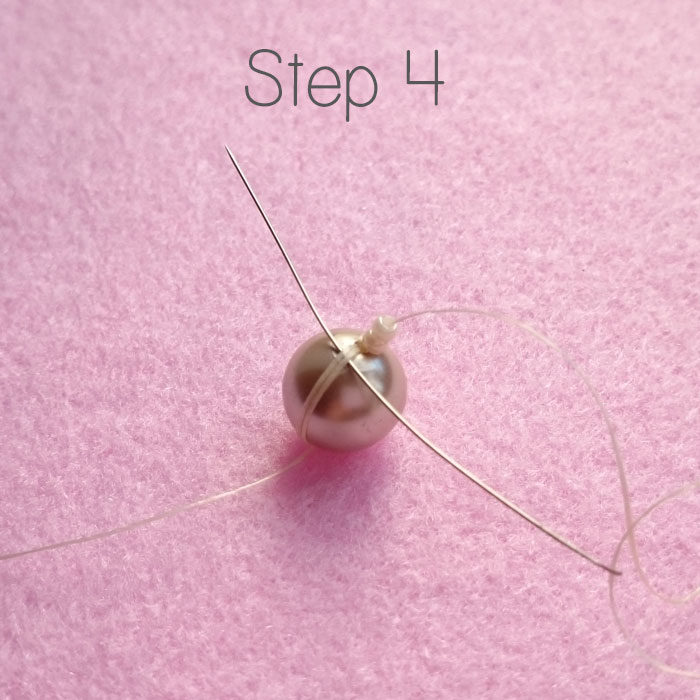 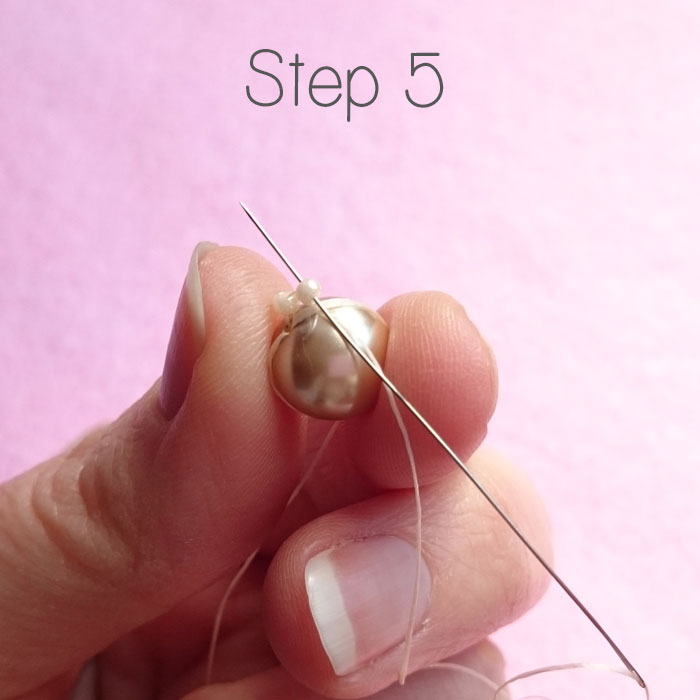 With your thread coming out of the center hole of the shell pearl, pick up two seed beads in the same color, (we’ve used the light beige).

Pass your needle under the thread on one side of the bead as shown in step 4. Pull the thread so that your seed beads sit flat side by side next to each other on top of the bead. You may have to push them down to get them in the right position!

Then, pass your needle up through the second bead (which will be the last bead you picked up). By doing this, you’ll be securing them to the thread that is wrapped around your shell pearl. 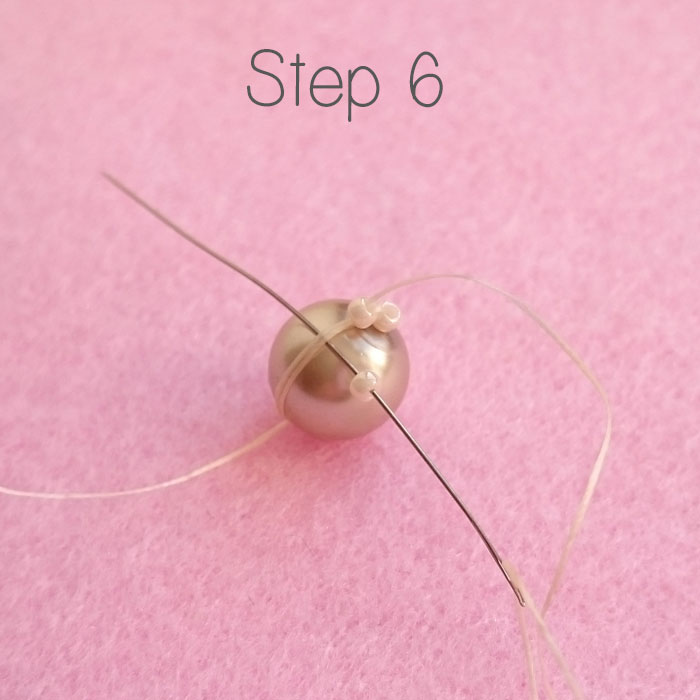 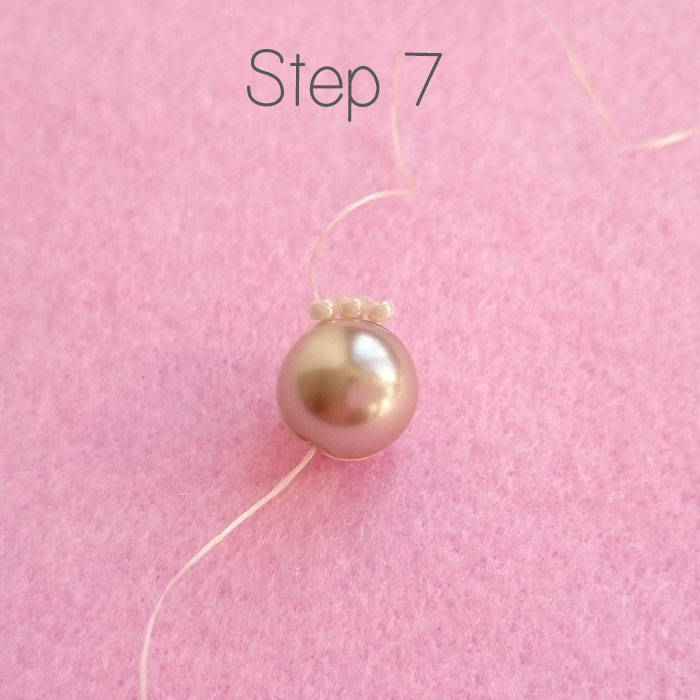 Now pick up just one seed bead in the same color. Pass the needle under the thread again as shown in step 6. Go back up through the same bead so that your thread is exiting out of the top of that last seed bead.

Make sure it’s sitting flat next to the others and keep the tension tight so that your beads don’t move around too much! 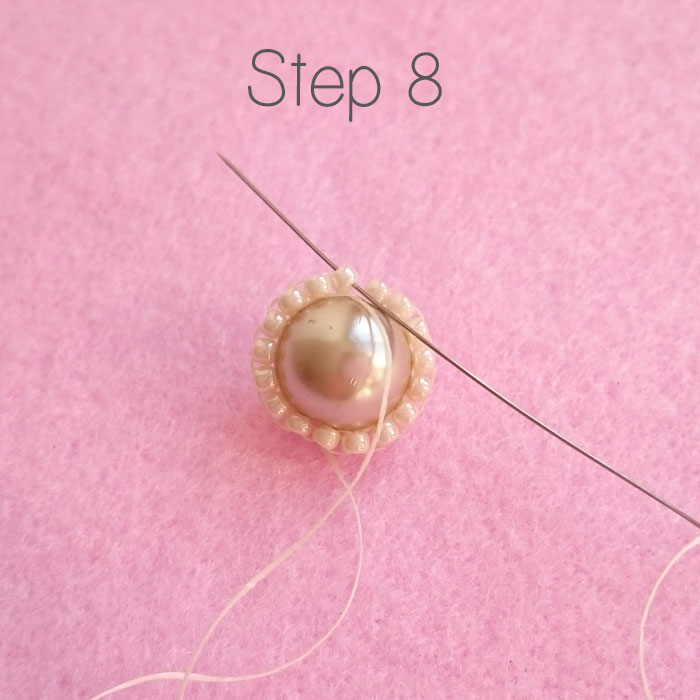 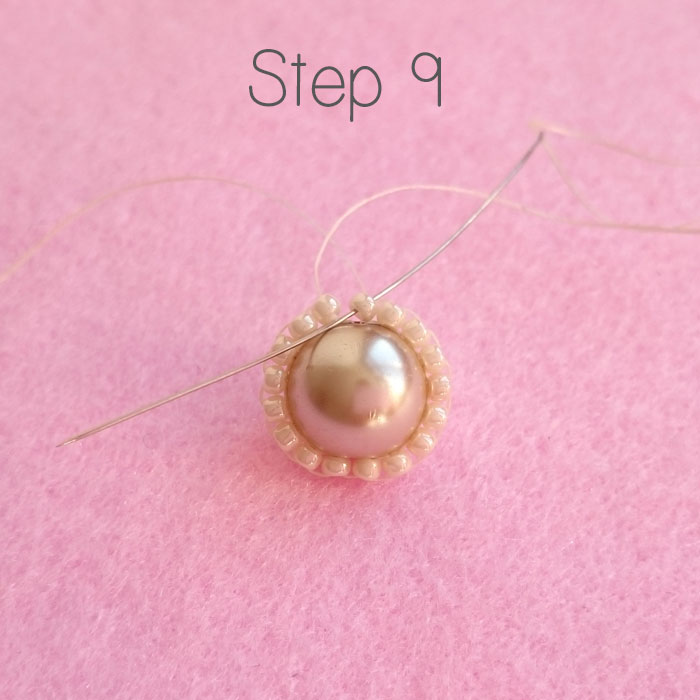 Continue picking up one bead and going under the thread and back up through the same bead until you’ve sewn beads all around your shell pearl. When you get around to the place where you started, you’ll need to decide if you can fit another bead in the gap or whether there’s not enough room.

You’ll know if there’s not enough room if you add a bead and they don’t lie flat! If that’s the case, take that bead out. You can close the gap by pulling the first seed bead over a little when joining the round. 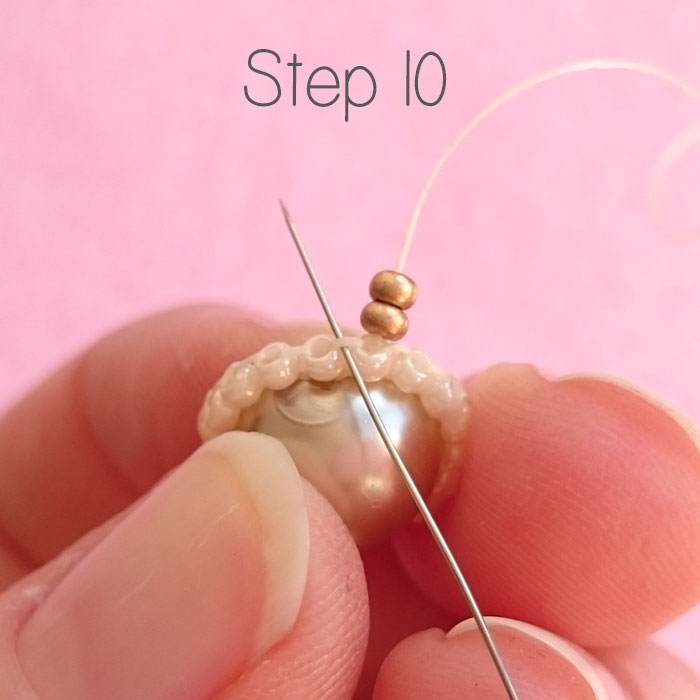 Lie these two new seed beads flat next to each other and go back up through the last seed bead that you picked up as per step 5. 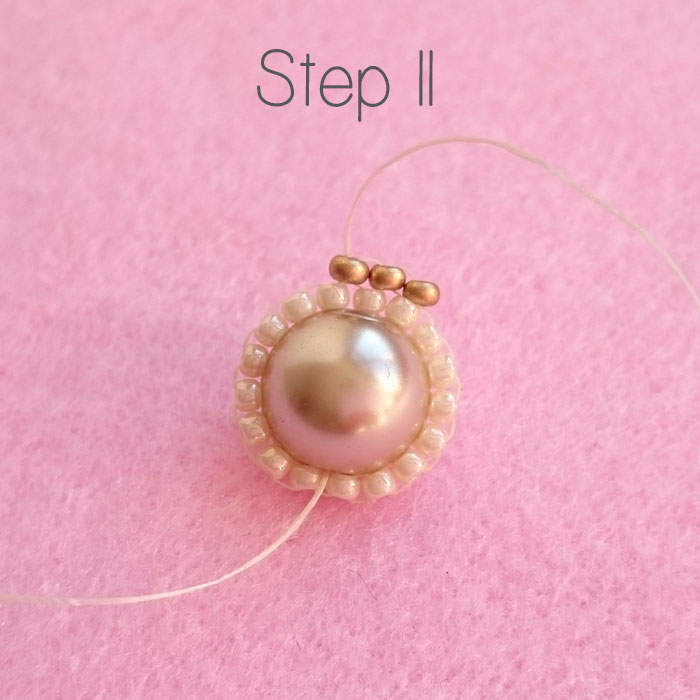 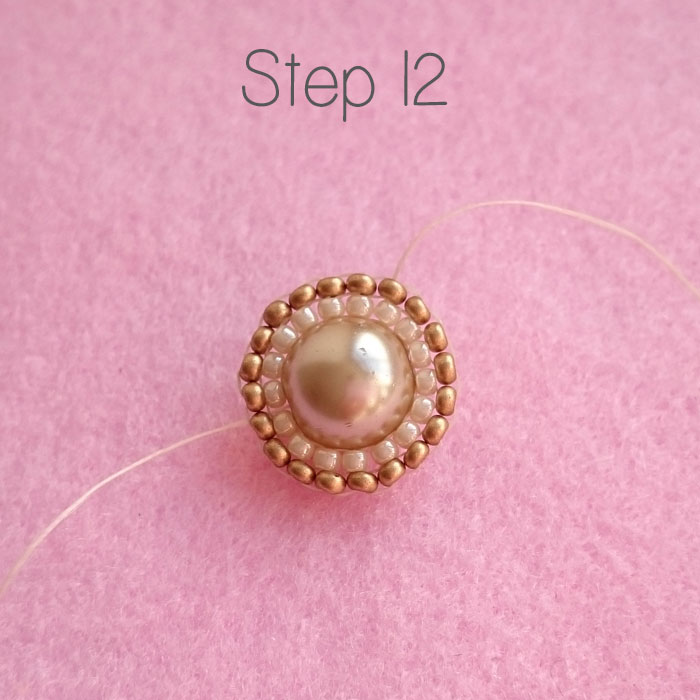 Once you have those first two seed beads sewn into place, continue this round by picking up just one seed bead every time, going under the “bridge” between the bottom row of seed beads and passing the needle back up through the same seed bead.

Do this until you’ve completed another round as shown in step 12, making sure to join the first and last seed beads together.

Tip! It’s much easier to have an even number of seed beads in this second round for the decorative edge in the next step. You may find that you’ll need to go under the same bridge of thread twice when adding beads in this row, if there is room to do so. 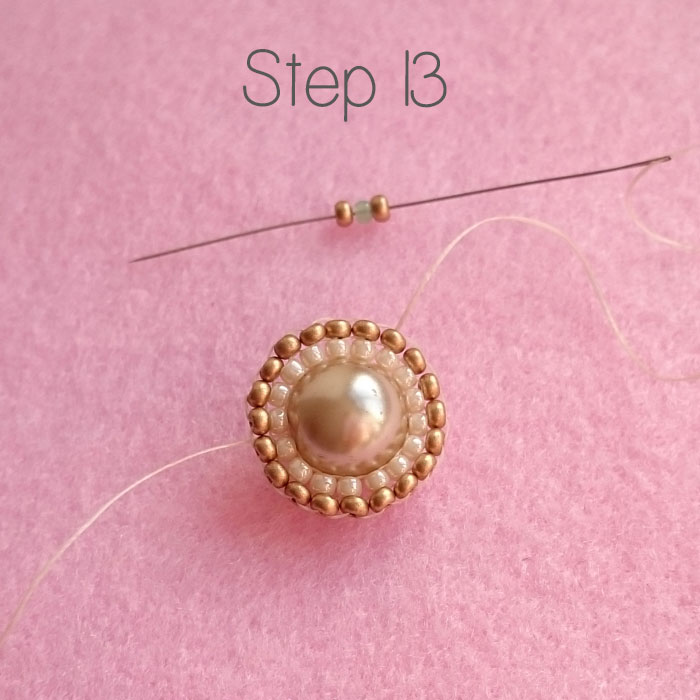 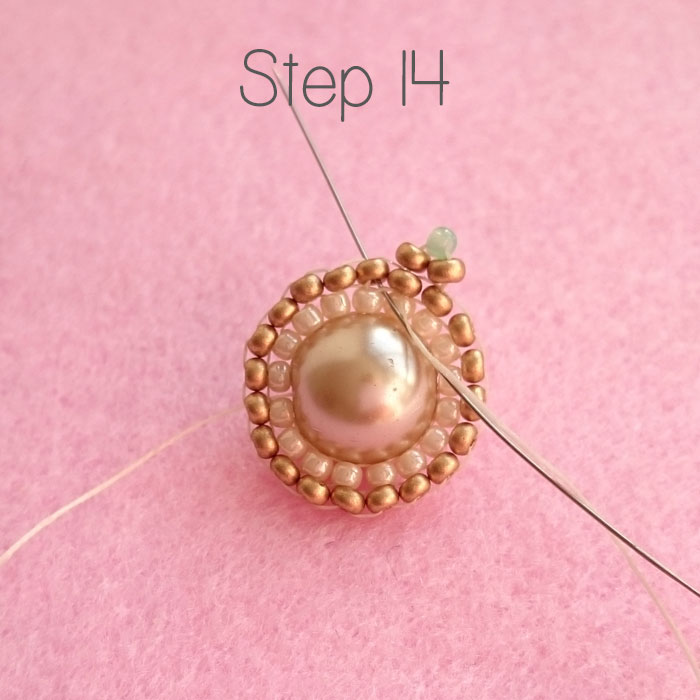 Make sure your thread is exiting out of one of the beads in the second round. Then pick up three seed beads onto your needle. We’ve used an accent color for the middle seed bead to give these earrings a splash of color! 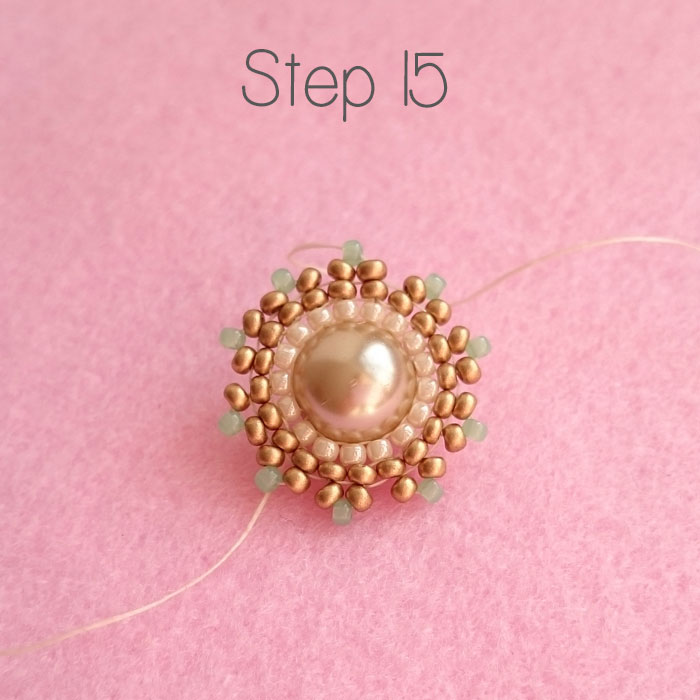 Continue steps 13 and 14 all the way around, until you have completed the round. Your earring component will now have a pretty picot decorative edge!

When you’ve completed this round, pass your needle through the first picot loop again to reinforce and so that your thread is exiting out of one of the very top seed beads in your accent color. 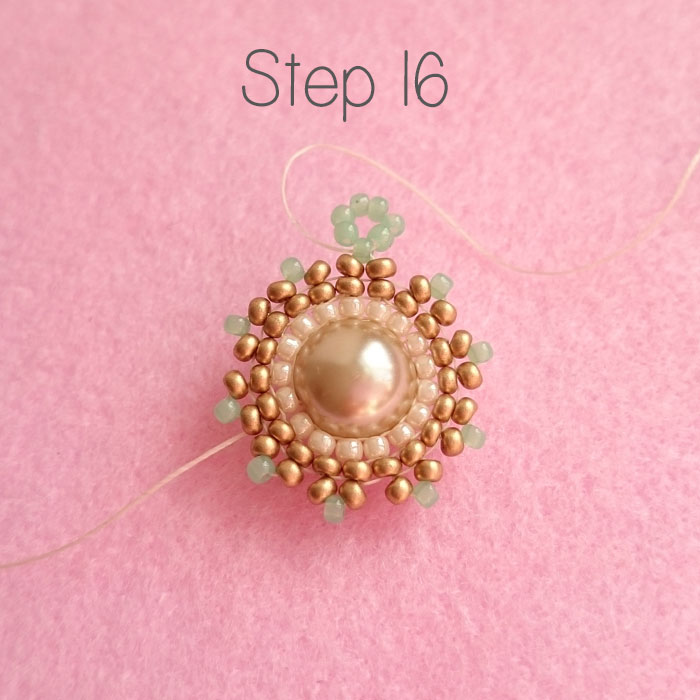 The final steps in this jewelry-making tutorial are to create a loop to attach your earwire. To do this simply pick up 6 seed beads in your accent color and go back through the bead that your thread is currently exiting out of to create a circle of beads.

Go around the circle of beads again with your needle and thread to reinforce because this part of the earring can become worn over time. 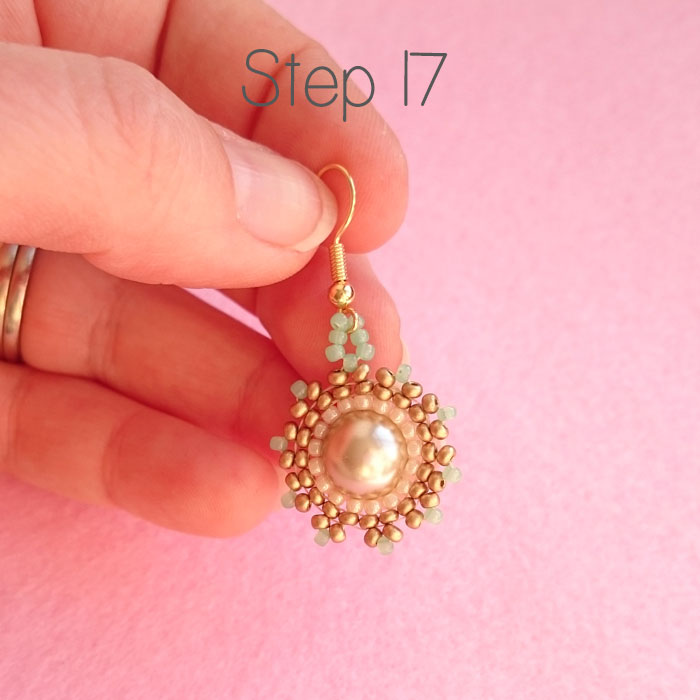 To finish, tie a knot between some of the seed beads where you can’t see it easily and pass through another few beads taking care to follow the direction of the thread previously. Tie another knot, pass through a few more beads and then trim off your thread.

Thread the needle onto the tail you left earlier and weave the tail into your beadwork before trimming off at that end.

Attach your earwire to the loop that you’ve just created using your jewelry pliers to open and close the loop. Repeat steps 1 to 17 to make your second earring component!

Did you enjoy this post? Please take a minute to share this with your social media followers.

4 thoughts on “How to Make Circular Brick Stitch Earrings”