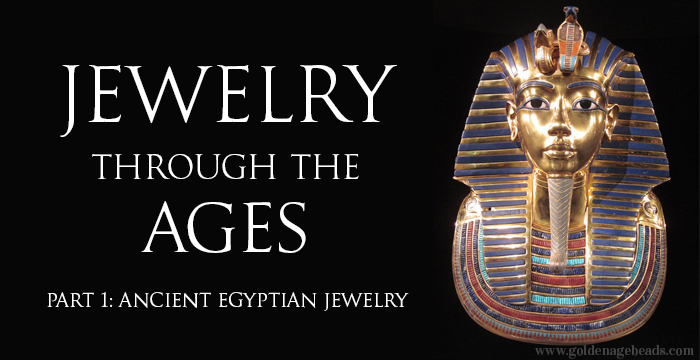 Ever wondered when and how jewelry first came into existence? Or how jewelry has changed over the years? In this new series on our blog, we’ll be exploring the history of jewelry and its development throughout time.

The history of jewelry dates back to prehistoric times when early humans wore shell, bone, wood, pebbles, animal skin and feathers as adornments, or as part of weapons and amulets. Early man used these materials for bodily decoration for thousands of years.

One of the pieces of evidence that jewelry existed in prehistoric times is some decorative sea shell beads (the oldest known) that were found in a Morocco cave between 110,000 and 73,000 BC. Experts believe that these beads were used as either amulets or for adornment purposes.

Copper first made an appearance in the making of jewelry around 5000 BC. It would be the beginning of a new era in jewelry production. Around 4000 BC, the Thracians started to make the first objects from gold.

Around the same time, gold gathering began in Egypt along with the production of elaborate jewelry, ornaments and amulets, many of which carried the intricate designs of animals, insects and goddesses. Later, jewelry production continued in ancient Mesopotamia (2750 – 1200 BC) and ancient Greece (1400 – 30 BC).

It’s ancient Egyptian jewelry that we’ll be exploring in more detail today. The ancient Egyptians were among the first wearers of established jewelry made from precious metals.

The Egyptians valued personal adornment and jewelry such as statement necklaces, pendants, cuff bracelets and amulets were worn by all classes. However, it was mostly wealthy Egyptians that could afford to wear jewelry made from shiny gold or precious gems and so such jewelry became associated with power, wealth and status. The Egyptians wore their jewelry in life and in death as many pieces were entombed with them during burials.

How Egyptian jewelry was made

It’s believed that the ancient Egyptians made jewelry in workshops and that multiple workers were involved in the process, working in an assembly-line fashion. Different individuals would work on different components, for example, one would be involved in making beads while another would drill holes in them.

The main metals used to make jewelry back then were gold and copper. Gold was mostly worn by the wealthy and copper was used by the masses because it was more affordable. Silver seemed to be quite rare at that time.

Probably one of the most iconic ancient Egyptian jewelry pieces was the wide collar necklace which sat across the collarbones. This is an example below made from copper and gold foil, which was found at the burial site of an Egyptian man. It’s thought to date back to the end of the 5th dynasty or early 6th dynasty. 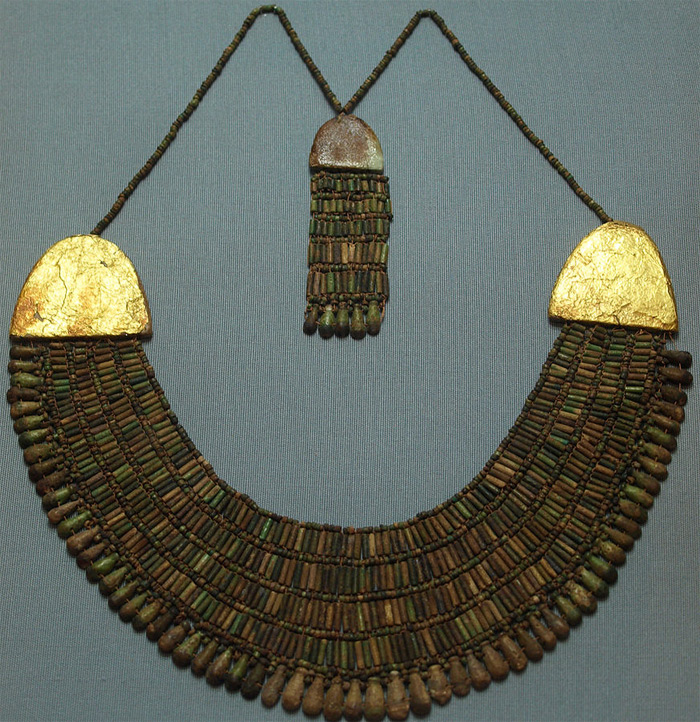 Precious and semi-precious gems such as emeralds, pearls, lapis lazuli, amethyst and turquoise were often inlaid into lavish pieces of Egyptian jewelry. There are plenty of examples of the craftsmanship that went into making jewelry all those years ago, because several pieces have been found and preserved as historical artifacts.

Take this scarab ring below which belonged to a royal servant. This was made in Egypt between 1794 and 1648 BC and has a rotating ring face. On one side there is an amethyst scarab (beetle) motif, an ancient Egyptian symbol that was associated with rebirth. On the other is a hieroglyphic inscription which translates to “Butler of Nefer-her: Hebi”, a reference to whom once owned this ring. 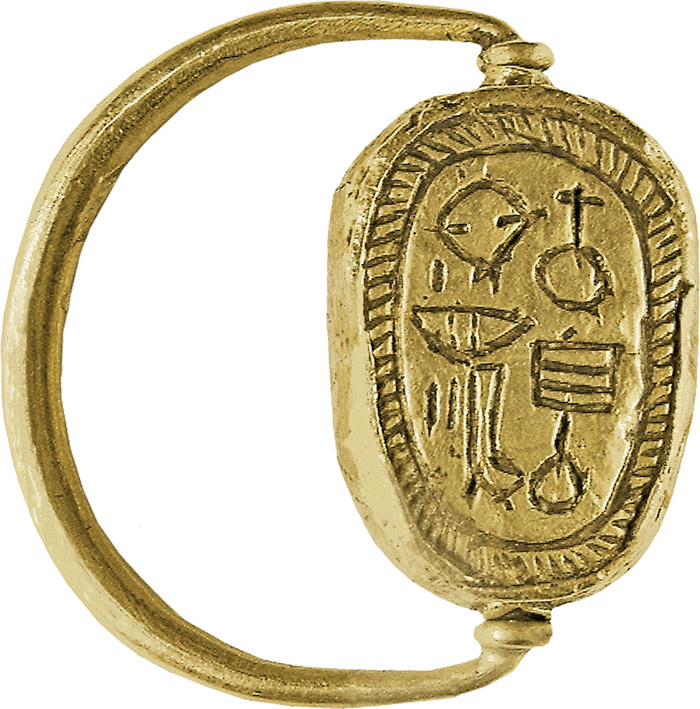 This piece below is a gold and green glass necklace with medallion, depicting a goddess. It was found in Egypt during the Roman period, between 30 BC – 300 CE. 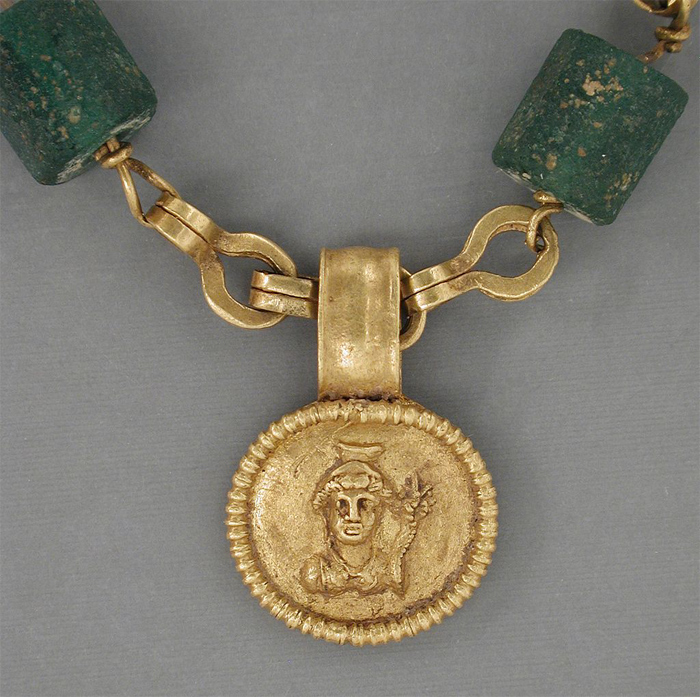 This incredible artifact below is a pectoral – a form of jewelry similar to a brooch. This colorful piece was found amongst other very high quality pieces in the tomb of Sithathoriunet, an ancient Egyptian king’s daughter of the 12th dynasty.

This pectoral bears the royal name of the Pharaoh Senusret II of the Middle Kingdom (believed to be Sithathoriunet’s father). It’s made from cloisonné (a type of enameling) inlays on gold with a number of precious gems: turquoise; garnet; feldspar; lapis lazuli and carnelian. 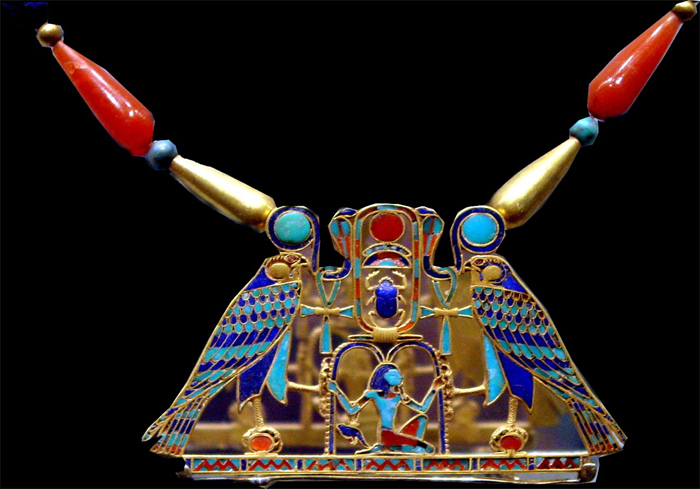 The art that is Egyptian jewelry

Although there has been an abundance of stunning jewelry styles since the very first examples came into existence, there’s no doubt that Egyptian jewelry was entirely a work of art when the sheer craftsmanship of these pieces is considered.

What’s more, have a think about the styles of jewelry that we see today with our regular and statement necklaces, cuff bracelets and most recently, shoulder jewelry. It seems that Egyptian jewelry still has a heavy influence on jewelry in the modern world in which we live.