Today, we’re exploring medieval jewelry as part of our series “Jewelry Through The Ages”, which is all about the history of jewelry and how it’s developed throughout time.

The medieval period (5th to the 15th century) is also referred to as the Middle Ages in European history. It began after the collapse of the Western Roman Empire and the first half of this time period was also known as the Dark Ages – for good reason.

Jewelry production in the Dark Ages

It was a time of extreme deprivation and suffering for most of Western Europe’s population because of the effects of famine, wars and the plague. Many people had to fight for their lives on a daily basis and the advancement of knowledge, technology and art came almost to a standstill.

It was only the Catholic Church (which had grown to become very powerful) and the very rich, noble or royal of people that managed to preserve art, wealth (and forms of jewelry) during this time.

Jewelry production in Western Europe was somewhat stagnant on the whole, with the most advancement being made in the British Isles. With that said, there are some fine examples of early medieval jewelry produced during the Dark Ages as we can see from some of the photos of historical artifacts later in this post.

Medieval jewelry not only included necklaces, bracelets and brooches as we know them today, but also other personal adornments such as belt buckles, buttons, hair pins, hat badges, arm rings, ankle rings, and decorations for weapons. Those that were very rich even had small pieces of jewelry sewn into their garments.

Gold was the main material used in jewelry design during the Middle Ages. Many different techniques were used to decorate metal such as enamelling, plating and gilding, soldering, inlay and casting.

Gemstones that were commonly used in jewelry during the medieval period were freshwater pearls, amber, jet and coral. These could all be found within Europe; whereas other gemstones like emeralds and rubies had to be imported from outside Europe (those gems were considered highly valuable).

Gems were mainly cut and polished into cabochons with rounded edges because facet-cut gems were difficult to create, at least until the end of the Middle Ages, when the process of gem cutting began to develop.

This image below shows a pair of Germanic fibulae (brooches or pins) used to fasten clothing. They date back to the early 5th century. This is an example of barbarian jewelry from the Migration Period (also known as the Barbarian invasions). 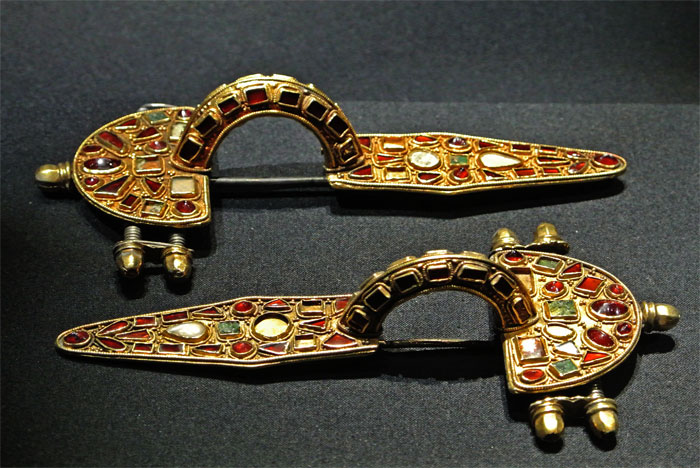 Barbarian jewelry was worn by both men and women, particularly those that were considered elite. Single fibula brooches were worn to fasten cloaks and they were worn in pairs on women’s dresses.

This amazing shoulder clasp (pictured below) is an Anglo-Saxon artifact found at Sutton Hoo in England, the site of a ship burial dating back to the early 7th century. This is an outstanding example of the craftsmanship that went into jewelry-making at that time.

The technique used to make this piece was cloisonné inlay work – patterns made by laying gemstone chips into gold. 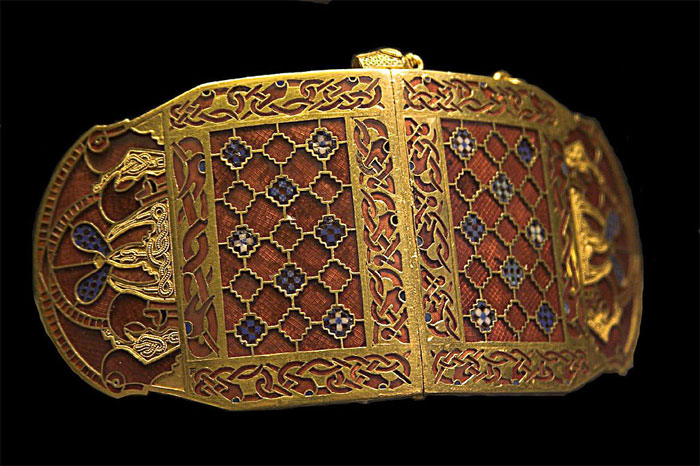 Jewelry of the Byzantine Empire

Although jewelry production was stilted in Western Europe during part of the Middle Ages, the artisans of Eastern Europe however, continued to develop jewelry and improve their craft thanks to the stability provided by the Byzantine Empire (the continuation of the Roman Empire).

Byzantine style jewelry was influenced by Christianity and many pieces featured religious motifs such as the cross or depictions of the afterlife. The cloisonné inlay technique was a popular method to use in jewelry of this style.

These colorful earrings below, which were most likely made as a gift for a Visigothic ruler of medieval Spain, are a fine example of Byzantine jewelry. They date back to the 6th century. The style of these earrings is not too dissimilar to ones that we see every day in the modern world! 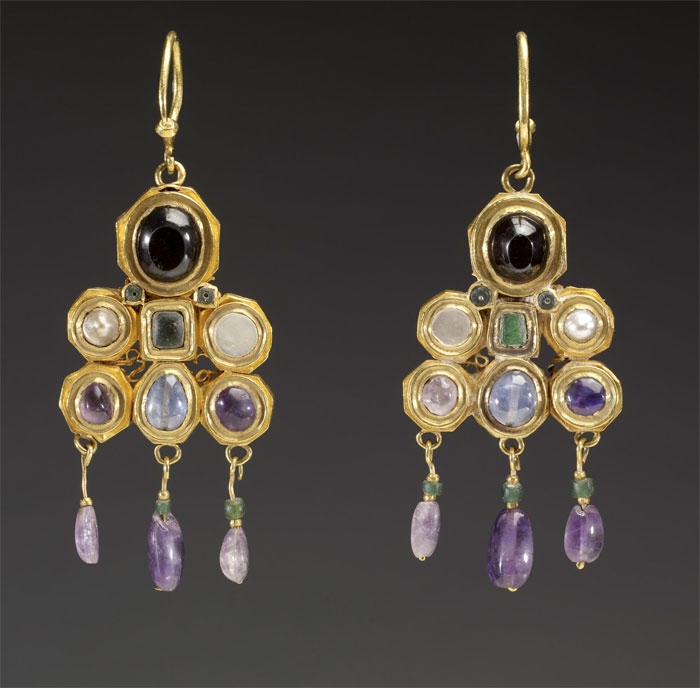 The Vikings (800 CE to 1150 CE) showed a preference for working with silver and although their jewelry started off as fairly plain and simple, they soon began to develop their craft into an intricate art form.

Many Viking pieces featured animals or other depictions of nature, and later pieces with geometric patterns started to emerge. Jewelry techniques used by the Vikings included filigree work and repoussè (where metal pieces are hammered on the reverse side to create a pattern on the front).

The image below is of a Viking neck ring that was made from three twisted silver wires and features a loop clasp. It was found buried with a plain arm ring and dates back to the late 9th or early 10th century. 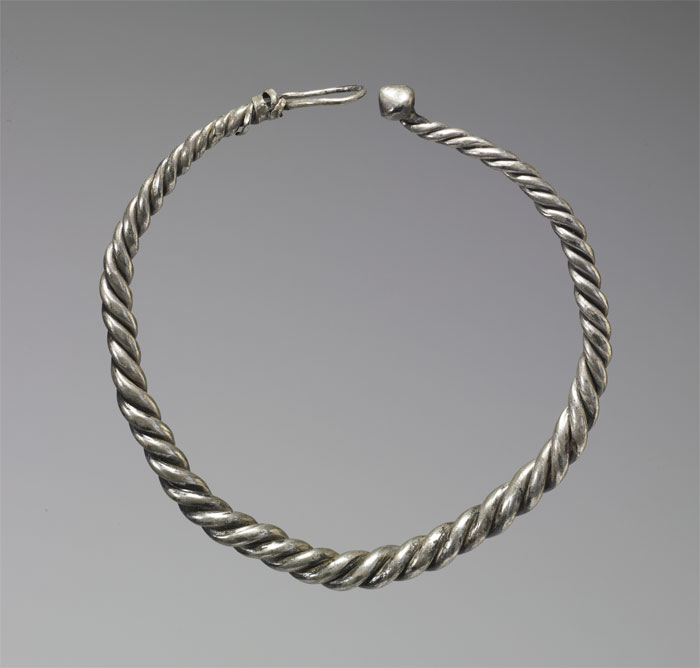 Jewelry in the High and Late Middle Ages

The High Middle Ages (1000 CE to 1300 CE) marked the start of the Crusades, which enabled the sharing and advancement of technology and art across Europe. With the expansion of trade, more and more people could afford to wear jewelry.

It became so widespread, that the middle class began to wear it as well as nobility and royalty. Because jewelry was generally seen as a symbol of status reserved only for the elite and wealthy, laws were passed with limitations on the amount of gold, silver and gems that “commoners” could wear.

The new innovation of gem cutting started to revolutionize jewelry design and by the Late Middle Ages (14th century onwards), styles of jewelry took a definitive shift from the Gothic style of the 13th century into that of early Renaissance.

We hope you found this article about medieval jewelry interesting! You might also want to check out our first post in this series on Egyptian Jewelry. 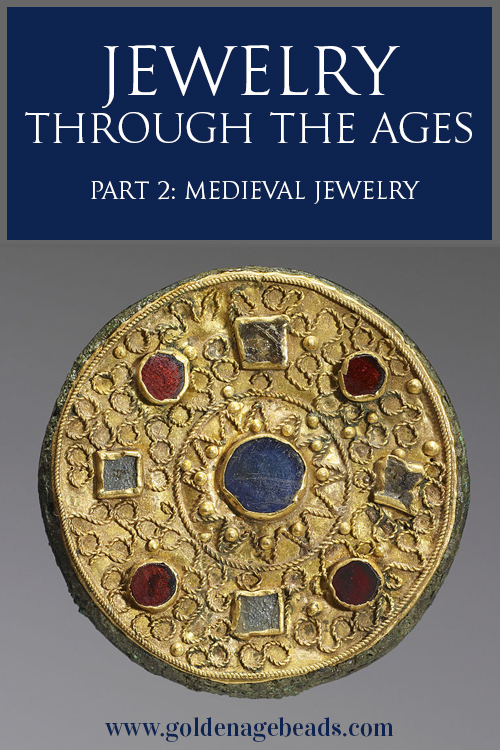 Graduating is a pivotal moment in many people’s lives, it opens the door to adulthood and a future full of possibilities. Congratulate and celebrate with a stunning, handmade jewelry gift…

This year for the holidays shop handmade for everyone on your Christmas list! Personalized jewelry and keychains make wonderful gifts for your loved ones. Commemorate an important date, coordinates to…

Fall season is almost upon us and it’s sure to bring much inspiration for you in your jewelry-making and craft projects when it arrives. You can find inspiration during fall…

Mother’s Day is the perfect opportunity for you to show that special lady in your life how much you care and appreciate what they do for you. What better way…

This week, as part of our Jewelry Through The Ages series, we’re revisiting the 1920s and 1930s to find out more about an iconic style of jewelry that still influences…

With Mother’s Day just around the corner, you might already be thinking of possible gift ideas. Many moms love to be pampered with jewelry, so why not make your own…