As part of our mission to explore jewelry through the ages, today’s article is all about jewelry from the late 19th and early 20th centuries – Art Nouveau and Edwardian jewelry.

Before we begin with Art Nouveau jewelry, let’s first look at what the Art Nouveau style is all about. It’s considered an international philosophy and complete art style, one that includes decorative and fine arts, interior design, architecture and textiles.

The Art Nouveau style was most popular between 1890 and 1910. The name Art Nouveau literally means “new art” in French and that’s what it was. It was a reaction to the academic art of the 19th century and was inspired greatly by the natural environment.

In 1895 and the years following, a German-French art dealer called Samuel Siegfried Bing played an important part in the popularity of the Art Nouveau style.

Siegfried Bing owned an art gallery named “Maison de l’Art Nouveau” which translates to “House of New Art”. His gallery was famous because it featured modern art exclusively and the name of his gallery later became the recognisable term for the Art Nouveau style itself.

The Art Nouveau style was immensely popular throughout Europe during this time period, but the effects were seen in the United States and around the world.

Art Nouveau jewelers embraced this new style as it was heavily focused on craftsmanship and creativity. The art of jewelry-making transitioned from stone setting to something more artistic – and radical.

Gold and silver metals were still used, in a softer way. Intense color was created through a variety of enamelling techniques including plique-à-jour (a technique to create translucent enamel, similar to the staining of glass).

Some jewelry designers preferred to work with glass and metal rather than precious gems. Shimmering moonstone and opal were popular gems to use in Art Nouveau jewelry along with materials such as bone and ivory.

Art Nouveau jewelry design had many distinct features including flowing lines and nature inspired motifs such as flowers, leaves, birds, snakes and butterflies. Mythological creatures were also heavily featured in jewelry from this era as well as a focus on the female form. Metamorphosis and eroticism was often seen in Art Nouveau jewelry.

One of the most famous jewelry designers of the Art Nouveau period was René Lalique (he was also known for his work in glass art). This is one of his most famous pieces below – his Dragonfly Lady Brooch, made around 1897-1898. 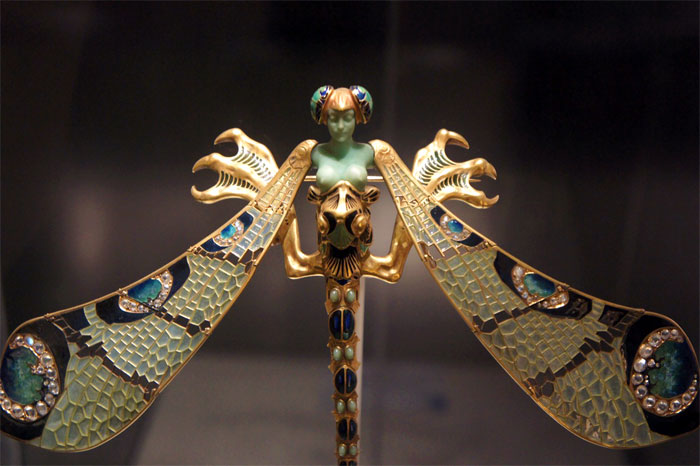 To create this masterpiece, René Lalique used different techniques and materials. He sculptured the head and body of the woman from green chrysoprase and the dragonfly wings are made from enamel with gold, moonstones and diamonds. The wings were hinged and the tail able to bend to allow movement when being worn.

Lalique’s dragonfly brooch is a great example of the Art Nouveau style. The nude woman represents the idea of the femme fatale – fused into an insect through metamorphosis.

Below are some more examples of Lalique’s work. This René Lalique Art Nouveau Enamel and Gold “Automne” Pendant (image courtesy of Macklowe Gallery), dates back to circa 1898. This jewel was created in enamel and gold, a celebration of autumn and nature with its beautiful berries and falling leaves. 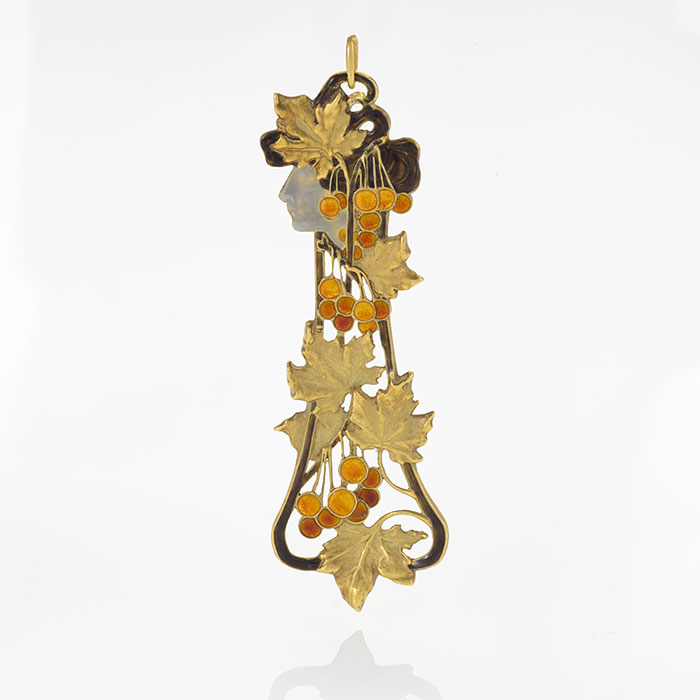 We mentioned earlier that Lalique liked to work with glass – the pendant below dates back to 1900 and includes a glass female figure. Other materials used to create this piece were gold and plique-a-jour enamel. 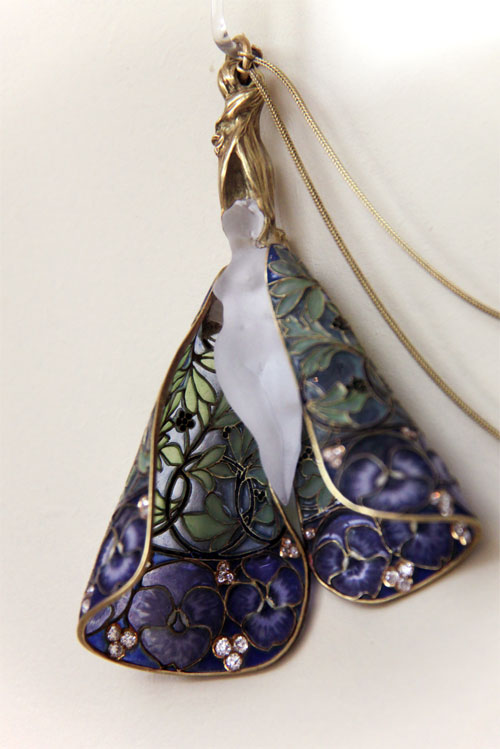 This brooch below by Lalique (date unknown) depicts another female form, with golden flowing hair, surrounded by flowers with curved stems. 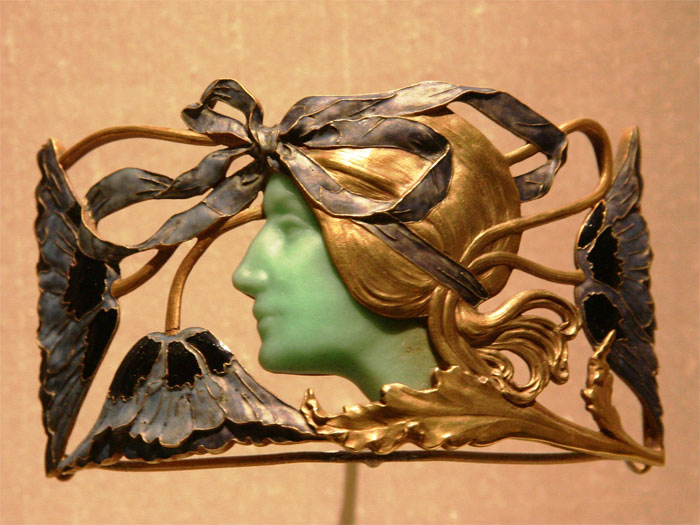 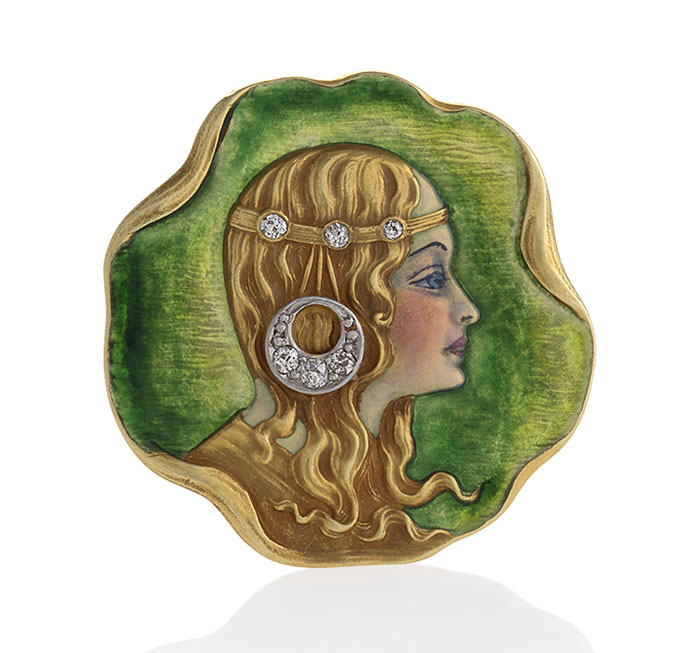 Although Art Nouveau jewelry was immensely popular during the late 19th and early 20th centuries, Edwardian jewelry was also very much on the scene during this time too in Britain.

After the death of Queen Victoria in 1901, the somber period ended and new jewelry designs were altogether happier and more sophisticated, complementing the elegance of Edwardian ladies.

Diamonds were the gem of choice for Edwardian jewelry, along with platinum metal. Diamond jewelry design had evolved to feature invisible settings that would show off the newer styles of diamond cuts.

Platinum metal was strong enough to cope with intricate detail and metalworkers would carve out lace or honeycomb patterns and shapes resembling embroidery or bows (take a look at these amazing pieces).

The trend of Art Nouveau jewelry began to fade out around 1910, however Edwardian style jewelry was still in full swing until around 1915.

We hope you found this article about Art Nouveau and Edwardian jewelry interesting! In case you missed the other articles in our Jewelry Through The Ages series, you can catch up here:

Why not subscribe to our newsletter to make sure you don’t miss out on the next post in this series?

Graduating is a pivotal moment in many people’s lives, it opens the door to adulthood and a future full of possibilities. Congratulate and celebrate with a stunning, handmade jewelry gift…

It’s been a while since we last posted a Blog Love edition here on the Golden Age Beads blog! So in this post, we’ve showcased some of our favorite craft…

Halloween is such a great time of year for both crafters and beaders. There are just so many things that you could make based around the Halloween colors alone, let…

With Mother’s Day just around the corner, you might already be thinking of possible gift ideas. Many moms love to be pampered with jewelry, so why not make your own…

With summer just around the corner, what better time is there to start thinking about creating some beautiful beach themed jewelry? In this post, we’ve picked out some of our…

Jewelry has been worn since the beginning of humanity as a way to show individuality and social status. From the days of stones and bones through modern handmade or 3D-printed…