This week, as part of our Jewelry Through The Ages series, we’re revisiting the 1920s and 1930s to find out more about an iconic style of jewelry that still influences jewelry design today – the style of Art Deco.

The Art Deco era took place from around 1920 to 1935. By this time, the First World War had changed the world in many ways. It had impacted directly on women’s fashion and the way they lived their lives generally.

During the war, women were required to undertake some of the physical work that men generally used to do. This required them cut their hair, shorten their sleeves and replace their long dresses and corsets with outfits that were a lot less restrictive.

When the war ended, the world celebrated by embracing new technology, innovations and art like never before. Money was being spent more freely at this point than prior to the war.

Women’s magazines were published which had a focus on women’s fashion and lifestyle. All in all, women were reluctant to go back to the restrictions of life before the war. It was certainly a time of tremendous change.

Art Deco became the new visual arts style of this time. It appeared in France just before the First World War and expanded internationally after the war, throughout the 1920s and 1930s.

The name “Art Deco” is derived from “Art Décoratifs” – taken from the International Exposition of Modern Industrial and Decorative Arts (World Fair) in Paris during 1925.

As a style, Art Deco is eclectic and based around modernism and the machine age. It’s characterized by geometric shapes, sharp and smooth lines and sometimes quite garish colors. The style translates not only to fashion and jewelry, but also to architecture and interior design too.

The splendor of Art Deco Jewelry

Vibrant and contrasting colors were often used in Art Deco jewelry pieces. Precious gems such as diamonds, emeralds, rubies and sapphires were featured prominently, alongside precious metals. Platinum was popular because of its strength and lightweight features. 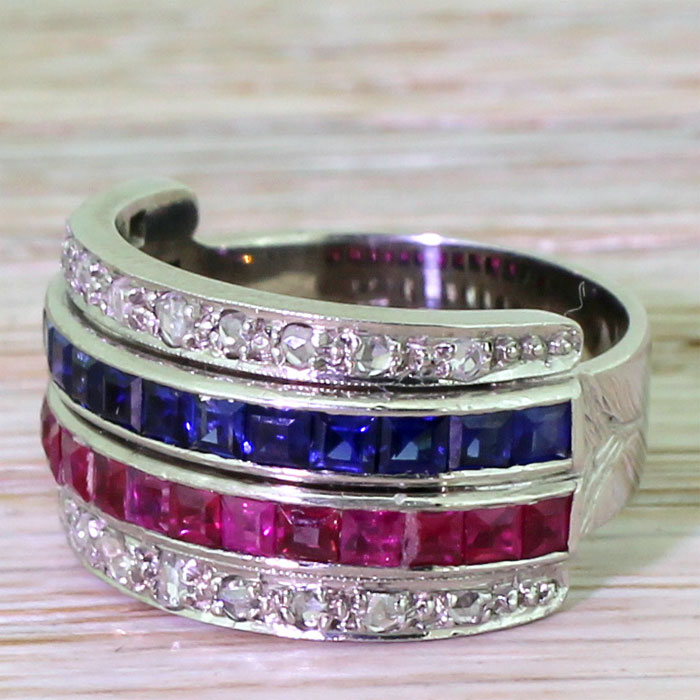 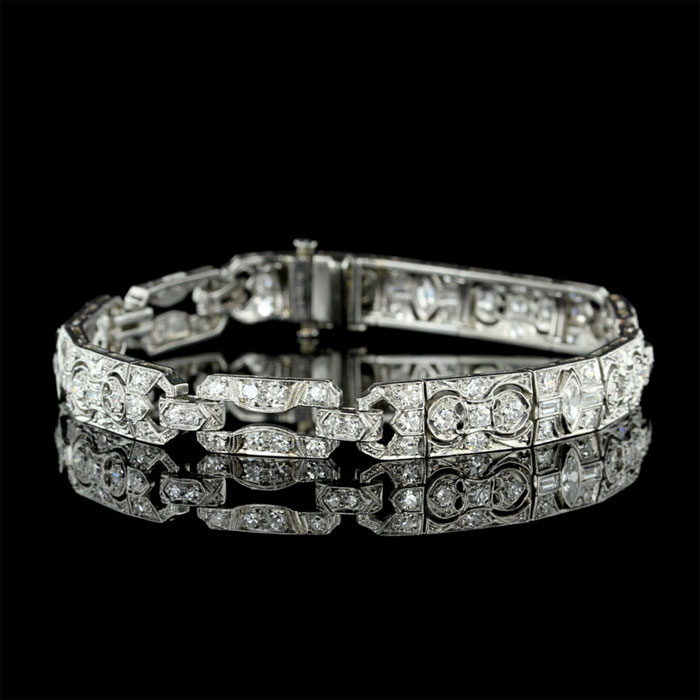 The image below is of the famous Mackay Emerald Necklace which is currently housed in the National Gem Collection of the National Museum of National History (administered by the Smithsonian Institution). This incredible Art Deco piece was designed by Cartier Inc. and presented to Clarence H. Mackay in 1931. He gave it to his wife as a wedding gift.

The 167.97 carat emerald is featured as the centerpiece of a square-shaped platinum framed pendant, edged with diamonds. The pendant is suspended from a diamond and platinum necklace.

As well as the inclusion of beautiful gems, symmetrical designs were popular during the Art Deco period and many pieces were inspired by nature with motifs based on flowers and animals.

In 1922, exciting archaeological discoveries were made in Egypt, in the tomb of the ancient Pharaoh Tutankhamun. The discoveries received world-wide press coverage and therefore some Art Deco jewelry designs also took influence from those ancient finds. Lotus blossoms, scarabs and pyramids were all used as jewelry motifs as a result.

Great innovations were made in jewelry production during the Art Deco period. Gemstones were cut in many different ways so that they could be arranged to form patterns or mosaic designs. A popular cut of gemstone was the “calibre cut”, whereby the gems were cut exactly to fit a specific design (usually square or rectangular in shape).

These unusual Art Deco 6.00 Carat Half Moon Ruby & Diamond Drop Earrings (image courtesy of Gatsby Jewellery) have been created with a mixture of cuts and shapes. Made around 1930, these stunning earrings feature half-moon cut rubies which provide a striking contrast to the magnificent diamonds which surround them. 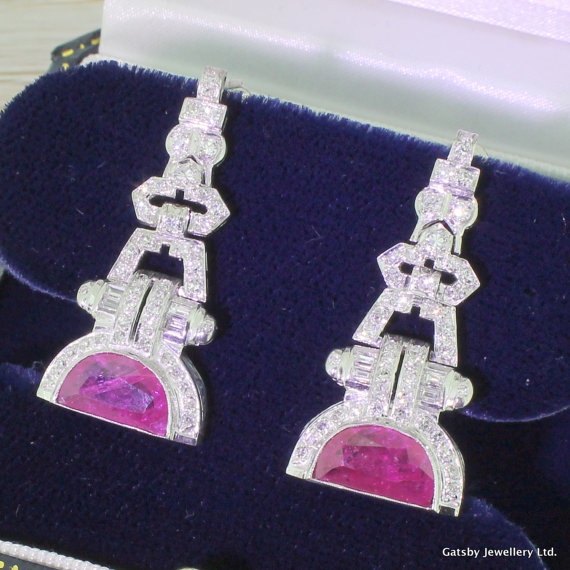 A unique innovation developed by the jewelry company Van Cleef & Arpels, allowed gems to be mounted in an invisible setting, meaning that no metal was visible. And while enameling was popular during the turn of the century, this began to be replaced by lacquering techniques.

During the end of the Art Deco period, jewelry designs became somewhat larger and even more detailed. Wide sparkly diamond bracelets, large brooches and vibrant earrings were popular as well as another interesting innovation – convertible jewelry.

Some jewelry pieces could be worn as two different items, for example some bandeaus (headbands worn across the forehead) might break down into bracelets and a brooch might split into two pieces to be worn separately.

The Art Deco style from the roaring twenties (and 1930s) is certainly influential, even today. In many pieces of contemporary jewelry, it’s possible to see the influence of this unique style as some designers like to include Art Deco details in their own modern designs.

We hope you enjoyed our article on Art Deco jewelry. If you missed the other posts in this series, you can check them out here!

One thought on “Jewelry Through The Ages Part 6: Art Deco Jewelry”