It’s not uncommon to consider something that is “Retro” as something dating back to the 1960s or 1970s. But when it comes to Retro jewelry, the time period involved goes back even further, to around the time of World War II.

Retro jewelry was first seen in France around 1935 with a collection of designs from Van Cleef & Arpels. They exhibited their collection at the 1939 World’s Fair in New York and when World War II began, those designs remained in New York.

American jewelry designers took great influence from those jewelry designs and so the style of Retro jewelry really came into effect during wartime. The angles and rigidity of Art Deco jewelry began to soften as a new style was born.

The war had an impact on jewelry production, not least because platinum and other white metals were rationed for military use. This meant that many jewelers of this age worked with gold as their metal of choice – usually a low karat gold for that matter.

Gold was sometimes mixed with alloys such as copper to create different tones of gold. Jewelers manipulated gold to create interesting textures, choosing to braid it, weave it and create filigree patterns from it.

Precious gemstones were scarce around the time of the Second World War because of the onset of economic depression. At this time, some jewelry pieces were created without gemstones – in just gold alone.

That’s not to say that no gemstones were used at all – on the contrary, jewelers looked to use cheaper gems such as Topaz and Citrine.

For those people that really wanted their jewelry designed with precious gems or metals during the war, they would usually have to supply the stones and metals themselves, perhaps by remodeling jewelry that they already had in their possession.

Jewelry styles from the Retro Era

Convertible jewelry was popular during this time period – these were jewelry pieces that could function as two different styles. Necklaces often converted into bracelets for example and clip brooches were worn singly or attached to necklaces, bracelets and even earrings.

In terms of chain styles, snake chain (called tubogas) was popular during the Retro Era. It was incredibly light but looked chunky and heavy. Necklace chains would sit at the base of the neck.

Patriotic jewelry was worn by many people, considering what was going on in the world during this time. Some jewelers designed “Good Luck” swallow brooches, soldier brooches and other items adorned with liberation motifs.

Van Cleef & Arpels were one of the most prominent jewelers of this time. They invented a piece of jewelry called the “Ludo Hexagone” strap bracelet which was made up of brick-like hexagonal shapes in yellow gold and occasionally, in platinum.

This Tiffany & Co. Ultra-Retro Buckle Bracelet below from circa 1945 (photo courtesy of The Three Graces) is similar in style. Designed in 14K rose gold in a subway tile pattern, this is the epitome of retro design.

The buckle design on this beautiful bracelet allows it to fit virtually any size wrist. The buckle itself features 22 round faceted rubies and 3 transitional cut diamonds. 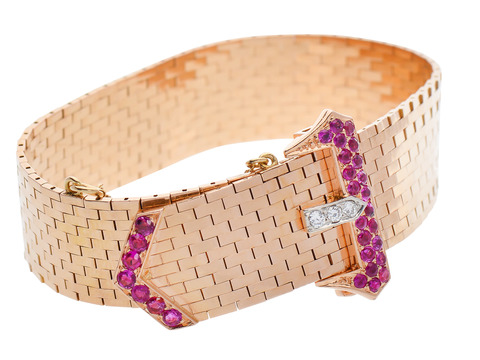 Rings from the Retro Era were big, bright and bold, designed to make a statement. Fan, scroll and ribbon designs, set with gemstones, were widely seen among the fashionable.

This exquisite Handmade Retro Vintage Diamond Cocktail Ring below (photo courtesy of EraGem) has been made using 14K rose gold. From the 1940s, this ring features an Old European cut bezel set natural diamond, surrounded by smaller diamonds and rubies. 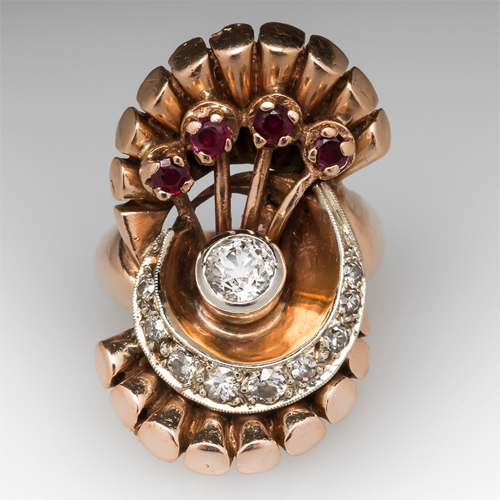 Earrings from this period were usually large, with clip-on backs. Like the motifs seen on rings, earrings featured scrolls, fans, flowers and ribbon designs, featuring precious gemstones such as diamonds, rubies, emeralds and sapphires. 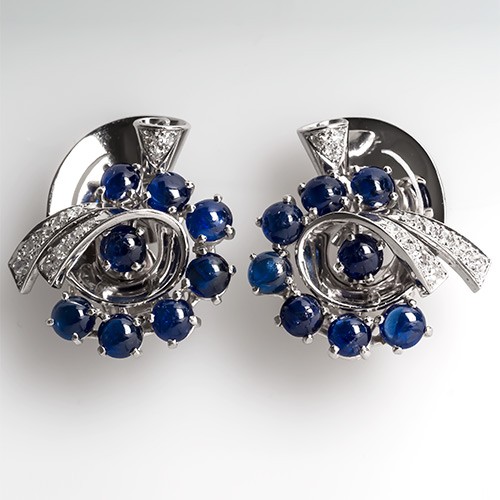 During the 1940s, jewelry design transitioned to incorporate a new concept – movement – with a view to bringing jewelry to life.

Gemstones in rings were mounted in such a way that they would tremble and move when the wearer’s hand would move. Nature-inspired jewelry pieces that were made up of branches, flower and petal motifs would be flexible so that the design would take a more natural, moving form as opposed to rigid.

Bracelets with collectible dangle charms were popular, especially after the war had ended. These were seen on the wrists of women from all walks of life.

It was possible to find and purchase charms that represented just about any object in real life. Miniature water cans, sail boats, musical instruments, flowers and animals, martini glasses – anything that could be designed as a charm – was.

This unusual 14K solid yellow gold Broadway Bound Hand & Theater Ticket Charm made circa 1950 (photo courtesy of The Three Graces) sums up the post war exuberance with its fun and carefree style.

This feminine charm features a slender hand closed around a golden theater ticket. The red enamel nail detail on the hand itself and the concept of going to the theater depicts glamour, fun and excitement. 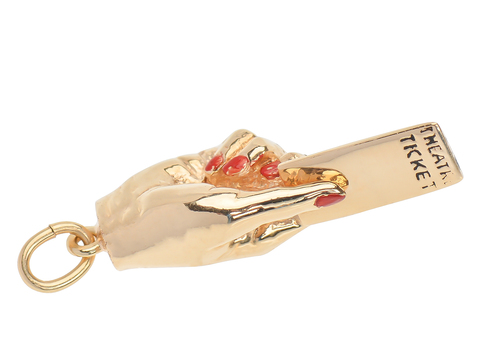 After the Art Deco period, right through to the 1950s, jewelry design was loud and proud. Jewelry pieces were on the large side overall and gold was the metal of choice.

Gold metal was manipulated into multiple shades and different forms to create texture and contrast. Precious and semi-precious gemstones were added to create bursts of color.

These days, Retro jewelry is both valuable and collectable. Not all that many examples of Retro jewelry have survived because up until 1970, many pieces were sold for scrap or melted down and reused.

If you have any quality pieces of Retro jewelry in your own collection, it’s well worth holding onto them as the value will likely increase in the future!

In case you missed the other parts of our Jewelry Through The Ages series, you can catch up here:

We’ve put together another handmade showcase to inspire you today, this time based around Thanksgiving! We’ve featured some of the best handmade Thanksgiving gifts and decoration ideas that we’ve found…

Gift giving is all part of the festive fun at Christmas time! But sometimes it can be tricky to know what to buy your family and friends, especially if you’re…

In this post, we’ve highlighted some of our favorite Christmas-inspired beads and charms in case you’re feeling the need to create something festive at the moment! It’s a great time…

If you love making jewelry, you’ll no doubt appreciate the amount of new materials and supplies you can buy these days in order to keep on coming up with unique…

Steampunk was first identified as a concept in the 1980s when it came about a sub-genre of science fiction writing, fueled by books like “The Time Machine” by H.G. Wells…

Are you getting excited for Halloween? Whether you are a jewelry designer or a jewelry enthusiast, you can appreciate these beautiful holiday designs. They are appropriately spooky without being creepy,…